My research examines how work, families and public policies structure economic inequalities. I am particularly interested on how inequalities change over time and vary across social groups and contexts. I employ quantitative techniques and longitudinal datasets from multiple countries along with content analyses of documentary and interview data.

Family change and economic inequalities: With the rise of wives’ wage labor, family income is increasingly shaped by women’s and men’s economic prospects as well as by who partners with whom. My research shows how these changes contribute to trends in household income inequality in the US and Europe. See relevant publications:

Variation and uneven change in gender relations in the family: Couples are today generally more gender egalitarian than in the past, but change has not been uniformly paced and there is a lot of variation in the degree of gender egalitarianism across social strata. I study how gender inequalities within couples change over time and vary across social groups. I am particularly interested in the role that economic resources play in fostering egalitarian gender relations in the family. See relevant publications:

Trends in Economic Homogamy: Changes in Assortative Mating or the Division of Paid Labor in Marriage? (Gonalons-Pons & Schwartz, published in Demography)

The growing economic resemblance of spouses has contributed to rising inequality by increasing the number of couples in which there are two high- or two low-earning partners. The dominant explanation for this trend is increased assortative mating. Previous research has primarily relied on cross-sectional data and thus has been unable to disentangle changes in assortative mating
from changes in the division of spouses’ paid labor—a potentially key mechanism given the dramatic rise in wives’ labor supply. We use data from the Panel Study of Income Dynamics (PSID) to decompose the increase in the correlation between spouses’ earnings and its contribution to inequality between 1970 to 2013 into parts due to (a) changes in assortative mating and (b) changes in the division of paid labor. Contrary to what has often been assumed, the rise of economic homogamy and its contribution to inequality is largely attributable to
changes in the division of paid labor, rather than changes in sorting on earnings or earnings potential. Our findings indicate that the rise of economic homogamy cannot be explained by hypotheses centered on meeting and matching opportunities and show where in this process inequality is generated and where it is not. 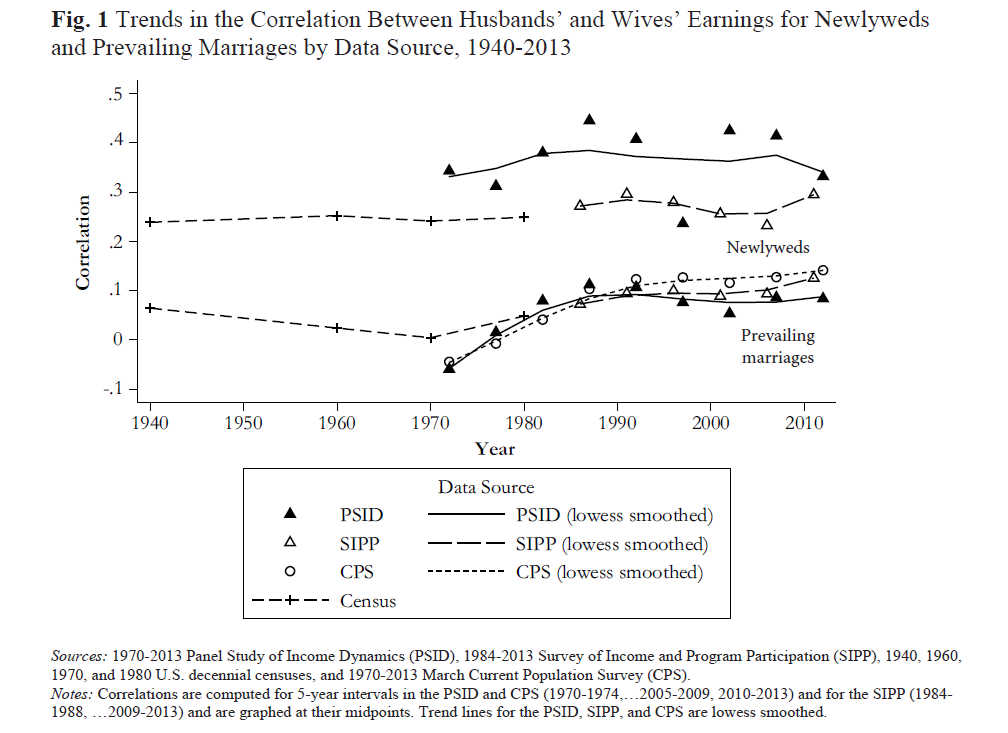 The Reversal of Wives Earnings’ Equalizing Effect. When and where Do Changes in Wives’ Earnings Increase Inequality? (Gonalons-Pons, ongoing project) 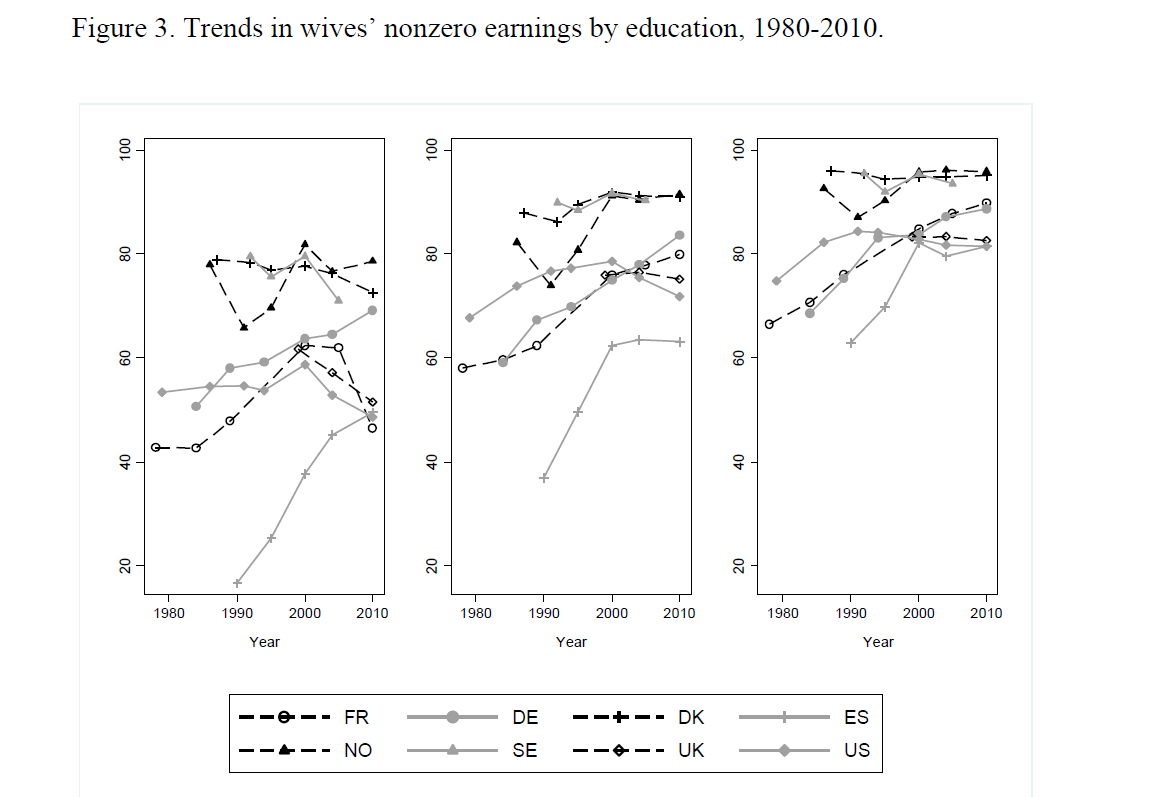 Trends in Relative Earnings and Marital Dissolution: Are Wives Who Outearn Their Husbands Still More Likely to Divorce? (Schwartz & Gonalons-Pons, published in The Russell Sage Foundation Journal of the Social Sciences)

As women’s labor force participation and earnings have grown, so too has the likelihood that wives outearn their husbands. A common concern is that these couples may be at heightened risk of divorce. Yet with the rise of egalitarian marriage, wives’ relative earnings may be more weakly associated with divorce than in the past. We examine trends in the association between wives’ relative earnings and marital dissolution using data from the 1968-2009 Panel Study of Income Dynamics. We find that wives’ relative earnings were positively associated with the risk of divorce among couples married in the late 1960s and 1970s and that this was especially true for wives who outearned their husbands, but this was no longer the case for couples married in the 1990s. Change was concentrated among middle-earning husbands and non-college graduates, a finding consistent with the economic squeeze of the middle class over this period. 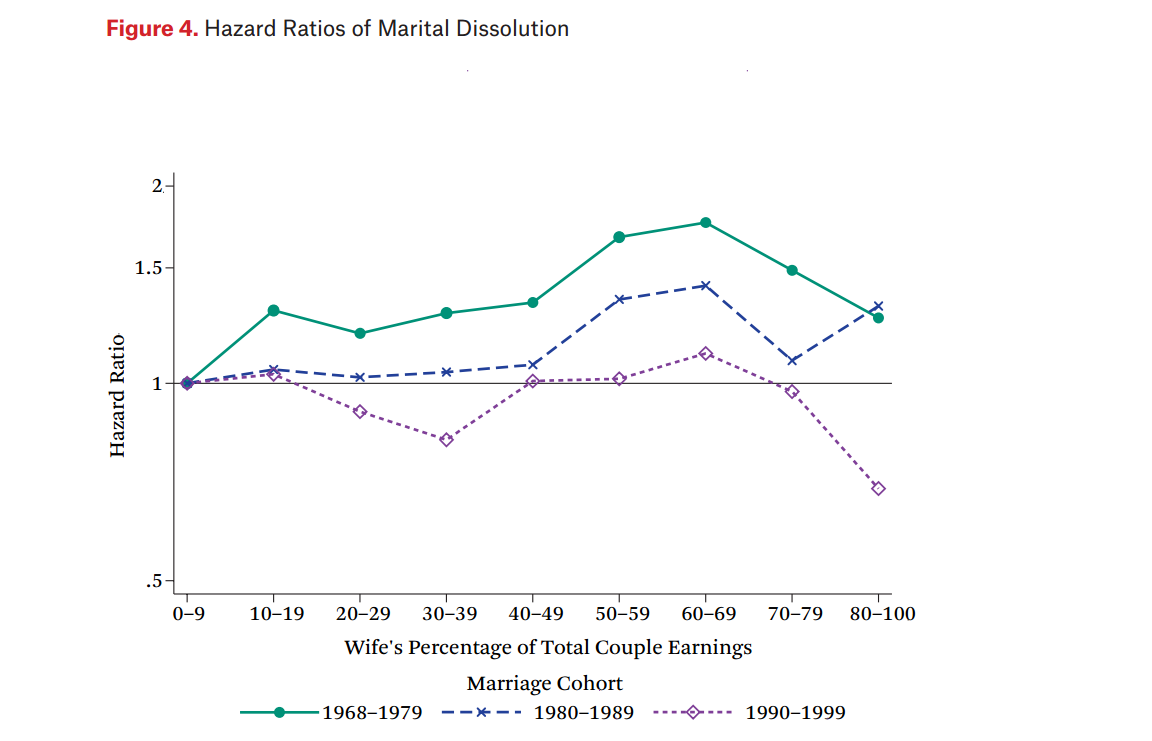 Many households regularly outsource unpaid domestic labor by purchasing services and products to help with cleaning, cooking, ironing, and other chores. Despite the prevalence of this practice, scholars know little about how it affects inequalities in the time spent on housework. Drawing on data on 3540 dual-earner households in Spain, this article examines the relationship between hiring domestic work and both the within-household gender gap in housework and the class gap in housework among women. I find that women who hire do about 30 min less housework per day than non-hiring women, but in relation to their partners these women continue to do the same share of housework. Using counterfactual analysis, I find that the absence of paid domestic work is associated with a 20% decline in the class gap in housework among Spanish women. 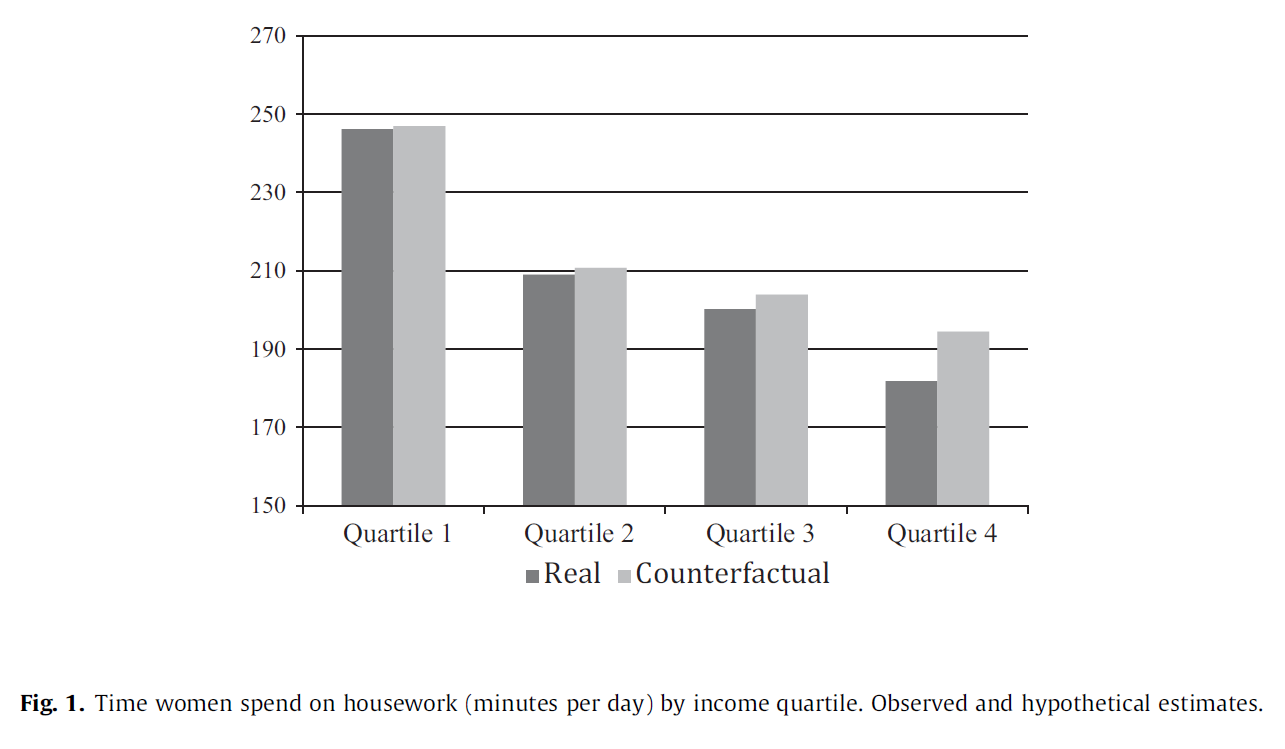 This paper examines how couple negotiation over work and earnings following parenthood has changed over time and how it has varied by social class. These questions represent critical gaps in the literature on gender, work, and family that limit our understanding of how family decision-making is shaped by changing norms and institutions. We leverage long-running, successive panels from the Survey of Income and Program Participation (SIPP) linked to administrative earnings data to assess trends over four decades in couples’ work and earnings before and after first birth. We find increases over time in wives’ employment and earnings following parenthood. The steepest increases in wives’ employment and earnings were in the in the early decades of our time series (the 1970s and 1980s), and gains were greatest among college-educated wives. Observed changes in employment following parenthood have been minimal among husbands, resulting in convergence in couples’ work hours over time, particularly among the college-educated. Because husbands of college-educated wives experienced significant earnings increases over time in the years following birth (like their wives), we see no analogous trend toward convergence in couples’ earnings.  Results have implications for trends in family income inequality. 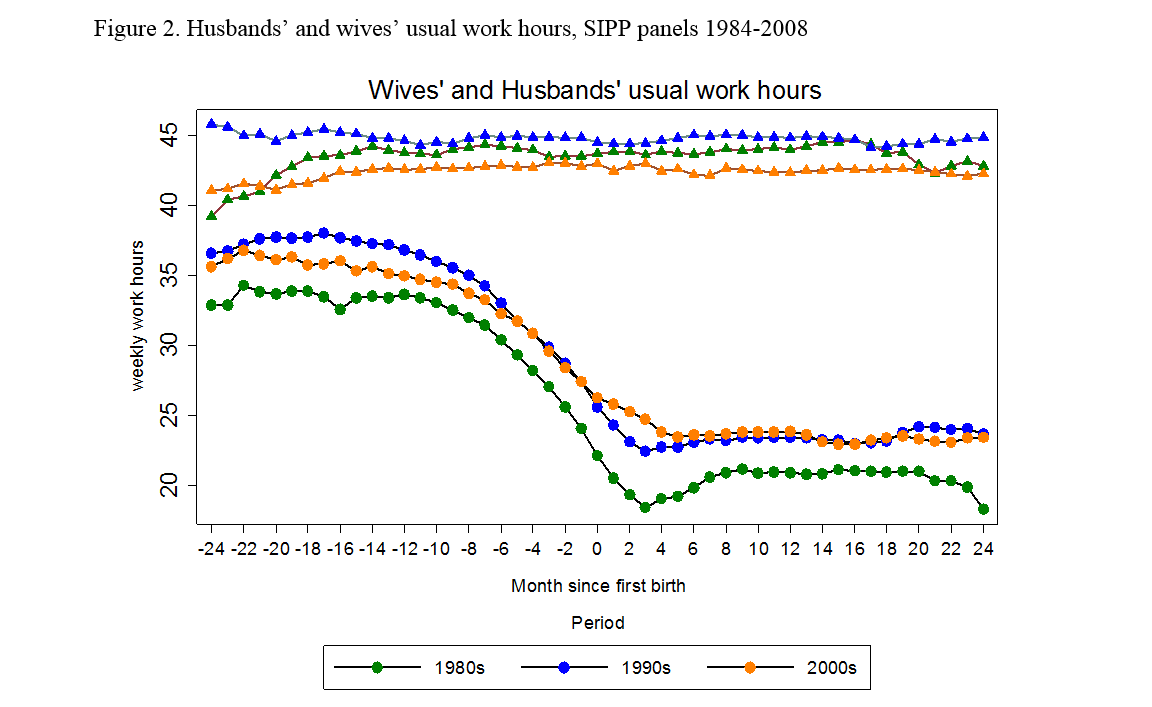 We examine whether migration affects the gender division of household tasks and participation in leisure within origin-country households using survey data from the Republic of Georgia. Our theoretical framework identifies two sets of mechanisms whereby migration might influence gender differences in home activities: migrant experience effects and migrant absence effects. We test for both types of effects on the probability that men and women perform gender atypical household tasks and engage in leisure activities by comparing households with and without currently absent and return migrants using probit regressions. We find evidence for both migration absence and migration experience effects on gender differences in housework and leisure. However, these effects are complex and contradictory: generally, male migration tends to exacerbate gender differences in the sending household while female migration tends to ameliorate them.

As the current economic recession dramatically raised the levels of unemployment in a number of European countries, we seek to address the question of how institutional protection for the unemployed has performed in this period of severe economic crisis. Previous research demonstrated that episodes of unemployment have enduring negative effects on worker’ career prospects and that labour market institutions, such as employment protection or unemployment insurance, play an important role mitigating those effects (e.g. Gangl, 2006). Earlier research also demonstrated that aggregate labour market conditions affect unemployment scarring, yet it has not been examined whether or not the effectiveness of labour market policies in protecting workers’ reemployment and earnings capacity also is, as might be expected, deteriorating in a period of severe economic crisis. We examine these questions using harmonized work history data for 28 countries for the years 2004 to 2012 (from the European Union Statistics on Income and Living Conditions (EU-SILC), German Socioeconomic Panel (GSOEP), the British Household Panel Study (BHPS), the Understanding Societies Survey (UKLS), and the Survey of Income and Program Participation (SIPP). We use multilevel modelling to estimate the effect of the recession on workers’ reemployment and post-unemployment earnings, and to assess how this effect varies across countries. 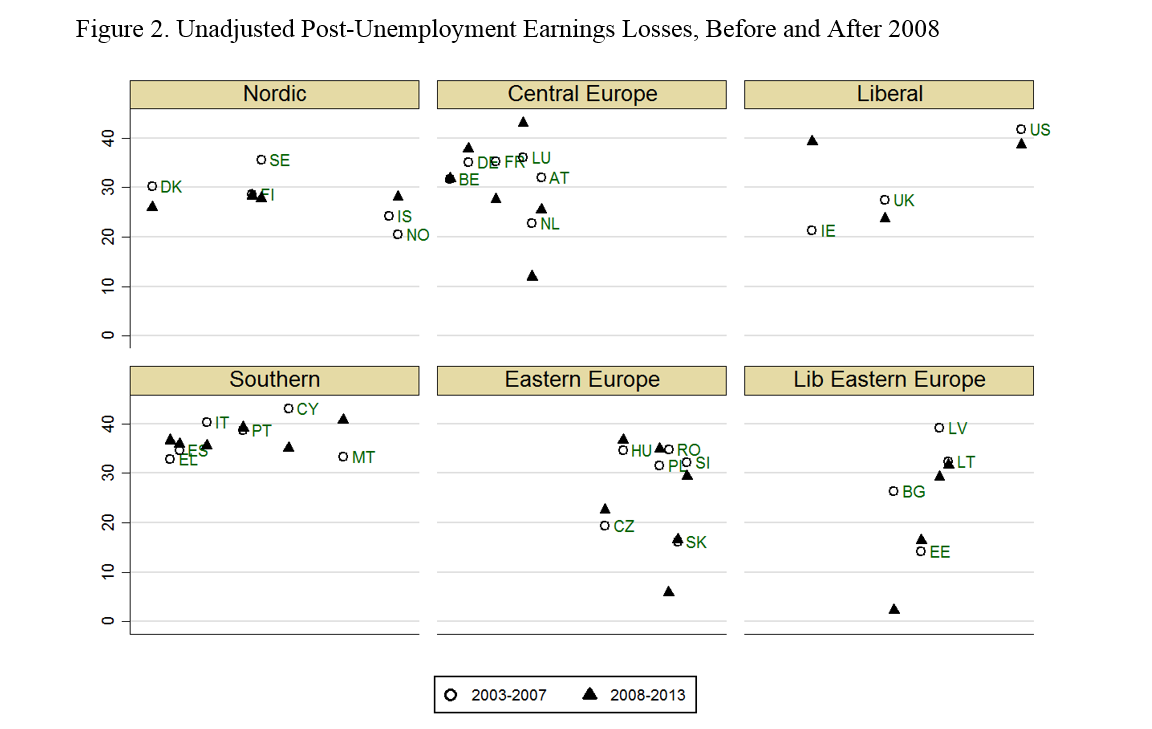 Since the late 1970s different political actors proposed reforms to Spanish domestic work legislation, which predicated that the special nature of this job required separated (and weaker) labor and social security regimes. From 1978 until the late 1990s critics argued that the existing legal framework constituted gender and labor discrimination because it illegitimately excluded domestic workers from rights that were guaranteed to the rest of the workforce. Starting in 2005, though, politicians who proposed amendments built on a different argument. They asserted that domestic workers needed better protection and professionalization to deliver necessary services for families’ work and life balance. This paper examines how these distinctive representations of domestic work as a political problem reflect changes in the institutional channels available to express the interests of domestic workers and employers. The analyses show that the large influx of international migrant women institutionally marginalized the voices of domestic workers while the work and family reconciliation policy discourse empowered employers’ institutional legitimacy. I argue that these changes are central to understand why the law reforms passed in 2011 continued to deny domestic workers equal rights on the basis of the special nature of their job.